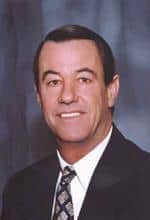 Chris joined H. Pearce Commercial in December 1979. Prior to that, he was employed by Jackson Newspapers of New Haven, CT as an account executive in their National Advertising Department.

Since joining H. Pearce Commercial, Chris has been a consistent member of the Million Dollar and Multi-Million Dollar clubs. Chris has devoted his efforts to all facets of industrial, commercial and investment type properties. Two major land development projects that Chris successfully marketed were the 106-acre Universal Business Center in North Haven, CT and a 103-acre retail development site in Westbrook, CT, now a regional outlet mall.

He also marketed to completion the 63-acre, Exit 10 Industrial Park, and throughout the years, has sold and leased space in this development for a number of the current property owners. Chris marketed for eight years one of downtown New Haven’s newest Class “A” office buildings, Whitney Grove Square, until its sale to Yale University in 1998. At the time of title transfer, this facility boasted an occupancy rate of 98%. Another prominent “Class A” commercial office development in downtown New Haven’s Central Business District that Chris marketed to 100% occupancy was the nearly vacant “Audubon Court,” located at 55 Whitney Ave. Chris then sold the office component of the project to Yale University.

A recent deal of note that Chris concluded was the identification of what started out as a suburban North of New Haven location for an emergency trauma center for Yale New Haven Hospital. Subsequently, this facility has been transformed into an adjunct opportunity for Yale New Haven Hospital’s Smilow Cancer Center. This undertaking was made possible after a location was selected, and although the premier property was not on the “Open Market” for sale, investigation through Ownership (AT&T) revealed that it was a surplus non-performing asset, and the sale was consummated.

He has been involved in many community activities throughout his career, including the Greater New Haven Chamber of Commerce, where among other responsibilities, he assisted in establishing the very popular Business After Hours networking meetings for local business people. He completed a five year term serving on the Executive Board of the Board of Directors of the Quinnipiac Chamber of Commerce where he was the Vice-Chairman of the Board and was also the chairman of its Economic Development Task Force.
A native of New Haven, Chris graduated from the University of Richmond, VA where he earned a BA in English Literature. He now resides in Wallingford, CT.

A curated shopping experience with recommendations tailored to your specific property criteria.